On his second stop in Bahrain .. Mass for Pope Francis attended by thousands 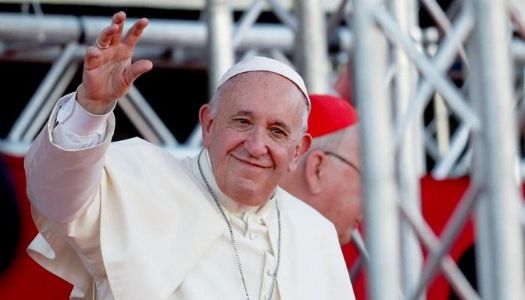 On the third day of his visit to the kingdom of Bahrain in the Arabian Gulf , and at the second stop where Pope Francis meets Catholic Christians, about thirty thousand people gathered since the early morning hours, at the Bahrain national stadium, they came enthusiastically to participate in the mass presided by Pope Francis

The participants, mostly from Asian countries, were distributed on the seats of the Bahrain National Stadium, the largest sports facility in the kingdom, located in the Riffa area. Families with their children, elderly people and clergy who had registered weeks ago flocked to attend the Mass "for justice and peace", which starts at half past eight (5:30 GMT).

The mass is the second stop at which Pope Francis meets Catholic Christians, after a first stop on Friday evening at the Cathedral of Our Lady of Arabia, the largest Catholic Church in the Gulf, which he entered to the sound of applause and tears.

During the mass, the pope will deliver a speech in Spanish, his fifth since arriving in Bahrain. The pope enters the stadium aboard the papal car, which he uses during his foreign visits. Since his arrival in Bahrain, the 85-year-old pope has been using a wheelchair and a cane to get around, due to chronic knee pain that he has recently suffered and hinders his movement.

Bahrain, a country of 1.4 million people that respects freedom of worship, established diplomatic relations with the Vatican in 2000. It is inhabited by about eighty thousand Catholic Christians, mainly workers from India and the Philippines.

This historic visit is the second of the Supreme Pontiff to the Arabian Peninsula since his historic trip to the UAE in 2019. It came within the framework of the Bahrain Dialogue Forum "East-West for human coexistence", which was attended by about two hundred prominent officials and clerics from the Middle East.

The pope warned against what he called a "tragic scenario". "We play with fire, with rockets and missiles, with weapons that cause tears and death, and we cover the common house with ashes and hatred,"he said.

The pope met the sheikh of Al-Azhar in a closed meeting on Friday afternoon. In 2019, the two men signed a historic document on human fraternity in Abu Dhabi.

In his speech to the "Council of Muslim elders", the Pope again extended his hand to dialogue. "I have come to you believing in God, a brother and a pilgrim of peace. I came to you to walk together".

While Pope Francis carries the banner of dialogue with Islam, at the end of the Bahrain Forum, the sheikh of Al-Azhar appealed to the scholars of the Shiite community to hold an Islamic-Islamic dialogue, during which they should renounce "sedition and sectarian conflict," at a time when several countries in the region and around the world are experiencing tensions on a sectarian background.

This is the thirty-ninth visit of the pope abroad since his election to the Holy See in 2013, as his tours included more than ten Muslim-majority countries, including Jordan, Turkey, Egypt, Bangladesh and Iraq.