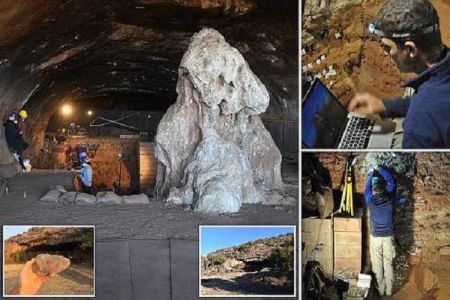 In South Africa, archaeologists have declared their discovery of the oldest roofed dwelling in Wonderwerk Cave and ancient evidence of human use of fire and performance of the ritual of life in that abyssal era.

Quaternary Science Reviews noted that the cave is over 140 metres long, and has long been studied by scientists, finding stone tools and other traces of human activity, but found no human remains.

The cause is likely to be easy access for predators and animals eating corpses to the cave.

The cave remained a place of habitation over a long period of time, where scientists found traces about 1 million years old to use fire, and where the torch was located at least 30 metres from the cave's entrance.

Deep inside the cave, scientists discovered small pieces of natural dye, found in this place 300-500,000 years ago.

Researchers assert that small pieces of magma are not suitable for making tools, but can be used for ornamentation and painting, where they can be milled, sprayed and decorated on an object or place, or used for painting on cave walls.