An army of bees makes a charming sculpture for Queen Nefertiti. 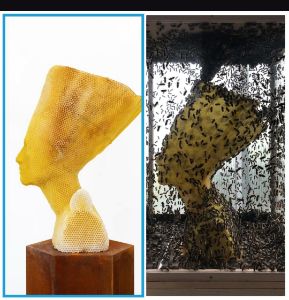 When planning to work on an art sculpture, one first risks that the materials that one might need, such as wood, or marble, but that was not the case with this artist, who was assisted by an army of 60,000 bees to make a charming sculpture.

Thomas Libertini was interested in working with honey wax because the idea of demise, the temporary nature of things, was very attractive to him.

In a statement, Libertini said: "I wanted to expand what's possible when it comes to making art by keeping myself out of the hammer and the plug."

His interest resulted in a charming sculpture made from the natural honey wax of the famous Egyptian queen Nefertiti.

Libertini said: "I wanted to expand what's possible when it comes to making art by keeping myself out of the hammer and the plug."

This artwork was created in collaboration with 60,000 bees who formed the sculpture using honey wax disks around a complex frame.

He said the reason he chose to make a sculpture for the Egyptian queen Nefertiti because he wanted to embody a symbolic queen of the bee colony. "There are not many women in history whose fame and faces are related to their names."

King Nefertiti was one of the most powerful queens in ancient Egypt. She enjoyed high status during the reign of her husband, Pharaoh Amnovis IV, aka Akhnaton, according to the official website of the General Intelligence Service of Egypt on the Internet.

The natural honey wax is one of the most solid natural materials, so "this sculpture will easily last a thousand years if kept in an appropriate environment. Hence her name, Eternity, "according to the artist.

The Libertini genius, who currently lives and works in Rotterdam, the Netherlands, took two years to complete the sculpture, through two phases.

Initially, the work was presented at the Kunsthal Museum in Rotterdam in the summer of 2019 as a living art installation, as visitors had the opportunity to observe the bee-building of this artwork.

The second stage was completed in 2020, amidst the calm wilderness of the Slovak countryside, to be presented and finally presented at the "Radiators Gallery" in Amsterdam from December 2020, until January 2021.

Making the sculpture was very complicated, so the bees did not always work according to the existing plan.

Libertini explained: "I had to intervene regularly in the process of building, growing, just like you do with Japanese miniature bonsai trees," asserting that "patience is the key."

The technical work required attention to and observation of weather forecasts, as irregular weather patterns were very counterproductive to bee health in general.

The artist also expressed his wish to see more people sculpted in person, as her online vision would not provide an opportunity to smell the strong smell of fresh honey and wax.

And it'll smell like you're standing next to a beehive and a garden full of flowers.