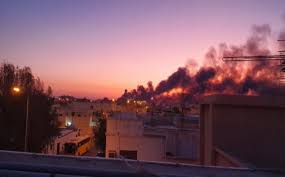 The spokesman of the Yemeni group Ansar Allah announced the targeting of Saudi Aramco in Jeddah.

"Thanks to God, Saudi Aramco is able to target the Saudi Aramco company in Jeddah at dawn with a SDS Type 2 winged rocket and the injury was accurate," the spokesman said in a tweet.

He also added, "This targeting comes within the framework of a natural and legitimate response to the continuation of the wanton siege and aggression against our dear people."

Earlier today, the spokesman for Ansar Allah announced that the Marching Air Force had targeted an important target at King Khalid Base in Khamis, riddled with a 2k-type bomber aircraft, indicating that the injury was accurate.

It should be noted that since March 2015, Saudi Arabia has been leading an Arab coalition that is conducting intensive military operations in Yemen, supporting the internationally recognized Yemeni government, which is fighting the Iran - backed group Ansar Allah.

We have 221 guests and no members online