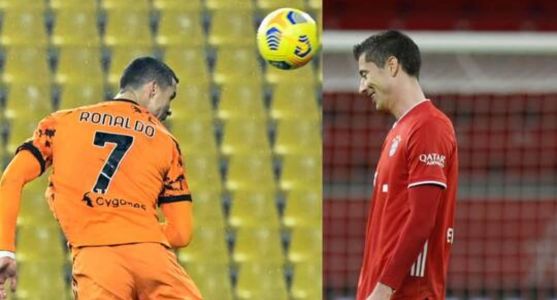 Bayern Munich striker Robert Lewandowski ended 2020 by scoring a brace against Bayer Leverkusen, Saturday, in the 13th round of the Bundesliga, to snatch the throne of the top scorer in the five major European leagues.

The Polish man scored two goals for his team in the match, one of which came in the 93rd minute, to lead Bayern to victory (2-1) and grabbed the German league lead from Leverkusen in the last matches of the year.

Lewandowski raised his score to 32 goals in the Bundesliga for the year 2020, and was the top scorer in the five major European leagues, at the expense of Cristiano Ronaldo, the Juventus striker.

However, the response came quickly from the Portuguese star by scoring a brace in the net of Parma, raising his score to 33 goals, which could be increased after his Polish rival Lewandowski stopped at 32 goals, ending his matches in 2020.

On the other hand, Ronaldo still has the opportunity to move away further with the top scorer in the major European leagues, with one match remaining for Juventus in Calcio before the end of the year against Fiorentina.

It is noteworthy that the closest competitors to the duo of Lewandowski and Ronaldo was the Italian Ciro Immobile, the Lazio striker, after he scored 26 goals in the Italian League, and he has two matches left during the year, one against Napoli tomorrow at Olympico and the other Wednesday against Milan in San Siro, making it difficult for him to catch up with Ronaldo.

We have 227 guests and no members online