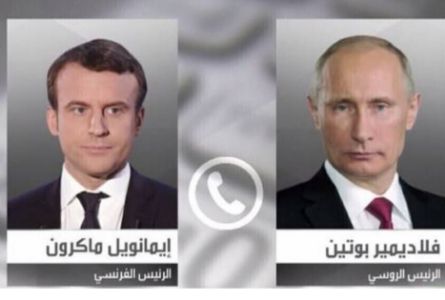 Russian Presidents Vladimir Putin and French Emmanuel Macron confirmed , the readiness of Moscow and Paris to coordinate work on the Karabakh issue within the framework of the "Minsk Group" concerned with the matter.

In a statement issued by the Kremlin at the end of a telephone conversation between the two presidents, Putin and Macron discussed "in depth the developments around Karabakh," taking into account the participation of Russia and France in assuming the presidency of the Minsk Group of the Organization for Security and Cooperation in Europe.

The statement mentioned that Putin put his French counterpart in the image of the mediation efforts made by Moscow to stop the bloodshed in Karabakh, and told him to deploy Russian peace-keeping forces on the contact line between the Armenian and Azerbaijani parties in Karabakh and along the "Lachin Corridor" linking Armenia and Karabakh.

According to the Kremlin, "It was indicated that the statement of the leaders of Azerbaijan, Russia and the Prime Minister of Armenia issued on November 9th is being implemented and the situation in the region in general has returned to stability."

The Russian presidency continued in its statement that the leaders of the two countries "expressed their readiness to coordinate work within the framework of the presidency of Russia, France and the United States of the Minsk Group of the Organization for Security and Cooperation in Europe. They focused on the importance of addressing urgent humanitarian issues, including the return of refugees to their permanent places of residence, and preparing Conditions for the normal life of residents, rebuilding the infrastructure and preserving Christian temples and monasteries. " In this regard, the Russian President informed his French counterpart of the establishment of the Russian Center for Response to Humanitarian Issues in Karabakh.

The statement also mentioned that the two presidents also discussed some aspects of bilateral cooperation, including the joint confrontation of the terrorist threat, adding that the two sides "positively assessed" the talks that the French Interior Minister Gerald Darmanan held with Russian security officials in Moscow on November 11-12. .