Bolsonaro: "I don't owe anything to anyone," and I have 3 options of imprisonment, death or victory 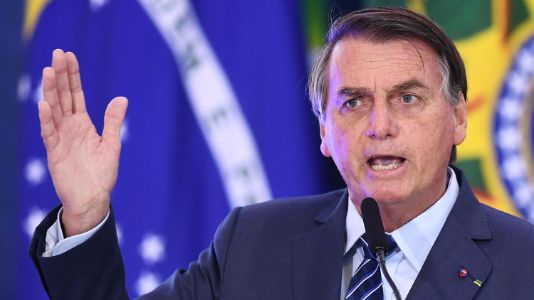 Stressing that he owed no one anything, Brazilian President Jair Bolsonaro identified his future options.

During a visit to the city of Goiânia in the centre of the country, Jair Bolsonaro, who is seeking a new presidential term in the 2022 election, said that there are three options for his near future: to be "imprisoned, to die or to win."

During a meeting with evangelicals in Goiânia, Bolsonaro said, "I have three options for my future: to be imprisoned, to die or to win, "according to local newspapers.

The Brazilian President stressed that "the first option does not exist," adding that he does and "I do not owe anything to anyone."

It should be noted that in an atmosphere of tension with the judiciary, Bolsonaro again attacked the Federal Supreme Court and the Supreme Electoral Court, warning that "no one here on earth is going to terrorize me."

Bolsonaro faced a setback Wednesday when the President of the Brazilian Senate, Rodrigo Pacheco, rejected his request to initiate removal proceedings against Alexandre de Morais, one of the 11 judges of the Federal Supreme Court and a member of the Supreme Electoral Court.

The controversy began several months ago, particularly because Bolsonaro questioned the legitimacy of the Brazilian electronic voting system, which has been in place since 1996.

The Supreme Court has reportedly opened several investigations against President Bolsonaro. At the beginning of this month, Judge Alexandre de Morais ordered that the President be investigated for "defamation" and "incitement to crime," as reported by France Press.

The Supreme Electoral Court also included Bolsonaro in a 2019 opening inquiry by the Federal Supreme Court into crimes and threats against several of its judges.

Before heading to Goiânia, the Brazilian President encouraged the population to acquire weapons, saying, "Everyone must buy a gun. An armed people will never be enslaved. "

On the growing concern about inflation in the country, Bolsonaro said: "I know the prices are high. A fool might say "I should buy beans" instead of a gun. Dude, if you don't want to buy a gun, don't bother those who want to do it. "

The President, in the capital of the state of Goiás, walked without a muzzle, amidst a crowd of supporters, as he showed in pictures posted on his social media.

He then invited evangelicals, who had contributed significantly to his election, to participate in marches of support scheduled for September 7th, the day of the celebration of Independence Day.