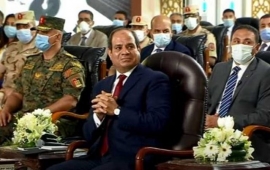 The Egyptian president Abdel Fattah Al-Sisi has opened several national projects in Alexandria, at the top of these project was the redeveloped road Al-Mahmoudiya Axis.

The president inaugurated Many other projects such as in oil sector, in addition to the housing project Bashayer Al-Khair 2, and “triple sewage treatment plant” in Borg El-Arab.

This event was by the attendance of Parliamentary Speaker Ali Abdel-Aal, in addition to Prime Minister Mostafa Madbouly and a number of ministers and military leaders.

President Al-Sisi said, speaking on Al-Mahmoudiya Axis, that some Alexandria residents, at first, had rejected this redevelopment project. But now they saw the project’s worth and there are many benefits from it to the city.

The president said that “Al-Mahmoudiya Axis is set to extend to the neighbouring Beheira Governorate”. He also referred to this demolition work which took place during the expansion process which is sought to make the public good great.

President Al-Sisi added “We demolish, to rebuild and the people of Alexandria knew and saw this.”

President Al-Sisi, during the Fourth National Youth Conference in Alexandria in 2018, confirmed on “Al-Mahmoudiya Axis”.

This project will create new opportunities to make the move of life easier as it will provide a new traffic artery in Alexandria, which is the second city and the country’s main port in Egypt, and is set to help reduce crowds of traffic congestion in the city. The project is also set to redevelop the Mahmoudiyah Canal area, which has for many years been neglected, whilst also redeveloping and improving the surrounding areas.

Moreover, this project has provided 15,000 direct job opportunities and 25,000 indirect job opportunities, in addition, it will raise production efficiency, water quality and pressure in networks. This will lead to improving water pressure weakness and interruption in water services across the city. The area was also seen as a prime target for rehabilitation due to the several important factories in the area and for the city’s future expansion.

Al-Sisi had issued a directive, in February 2018, to accelerate the finalisation of current projects, such as the Al-Mahmoudiya Axis and the housing project of Bashayer Al-Kheir in Alexandria Governorate. This presidential directive came during the inauguration of the first phase of a project in order to establish greenhouses, on an area covering 100,000 feddans, in the Matrouh Governorate.

The Al-Mahmoudiya Axis extends for about 23 km, and has been linked with the international coastal road. It includes from six to eight traffic lanes in each direction, with the axis serving four neighbourhoods, namely the Al-Muntazah First, East, Central, and West areas.

We have 61 guests and no members online