After Netanyahu's mandate.. International concern that his government will be the most right-wing in the history of Israel 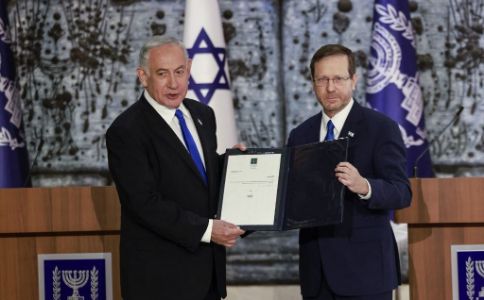 After the November elections in Israel , Likud party leader Benjamin Netanyahu last Friday began negotiations with his allies from the religious right and the extreme right to form a government that is likely to be the most right-wing in Israel's history, which raises many concerns internally and externally.

The president of the Hebrew state, Isaac Herzog, handed Netanyahu on Sunday the assignment book based on the recommendations he received from Knesset deputies

Netanyahu, who is now in charge of forming the government, has 28 days to assemble his ministerial team and can get an additional 14 days if necessary.

Netanyahu led the election results, which showed that the Likud party headed by him won 32 seats, while the two ultra-religious parties "yehudot Hatorah" for Western Ashkenazi Jews and the "Shas" party for Sephardic Eastern Jews won 18 seats, and the far-right alliance "religious Zionism" won 14 seats.

In a televised ceremony, Israeli President Herzog referred to Netanyahu's trial on corruption charges, saying that they do not pose a legal obstacle to his re-assumption of office.Netanyahu denies involvement in any wrongdoing, while vowing that the government he forms will be for all Israelis.

According to observers, one of the main factors that favored the victory of Netanyahu's bloc in the Israeli elections was the unprecedented rise of the extreme right.

After the recent elections in politically divided Israel, several Western countries, including the United States, called for "tolerance and respect for all in a civil society, especially minorities".

For his part, Palestinian prime minister Mohammed Shtayyeh said that the results of the Israeli elections reflect the growing manifestations of "extremism" and"racism", and stressed that they did not produce a "partner for peace".

In the previous Netanyahu governments, Israeli settlement expanded in the Occupied Palestinian territories and agreements were signed normalizing relations with Arab countries, which the Palestinians saw as a "betrayal".