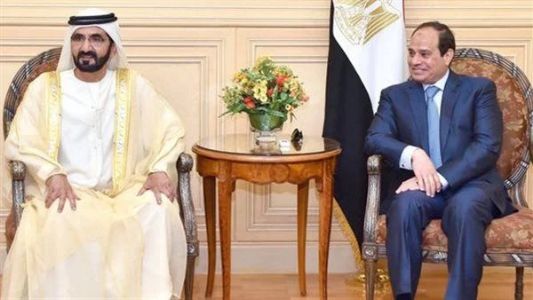 Coinciding with the celebration of the 50th anniversary of Emirati-Egyptian relations, Egyptian President Abdel Fattah al-Sisi received on Thursday at the Federal Palace Sheikh Mohammed bin Rashid Al Maktoum, Vice President and Prime Minister of the UAE and Ruler of Dubai.

The celebrations will be held in the Egyptian capital Cairo under the patronage of Sheikh Mohammed bin Zayed Al Nahyan and Egyptian President Abdel Fattah al Sisi over 3 days in the presence of a large group of ministers, government officials, businessmen and investors, as well as a large number of cultural and media leaders from the two countries.

He said: "today, the UAE is celebrating fifty years of stable and developed brotherly relations in Egypt.

We are also celebrating and celebrating the beginning of a new 50 years , also under the leadership of my brother President Abdel Fattah al-Sisi and my brother Mohammed bin Zayed, president of the state, God bless him, Egypt and the UAE have one heart,"he said.

Al Maktoum pointed out that the brotherly relations between the UAE and Egypt were founded on the values of mutual respect and joint work aimed at achieving the interests of the two brotherly peoples and the interest of all Arab peoples based on the keenness of the two countries to provide a distinguished model of what Arab ties should be, according to the UAE news agency "WAM".

He added that the next phase will witness more constructive cooperation in various vital sectors to benefit from the enormous potential enjoyed by the UAE and Egypt, pointing out that the two countries are looking to the future with an open mind and a firm will to continue the development work in all fields, especially those that affect the lives of peoples.