Before the climate summit .. Egypt controls the "black cloud" 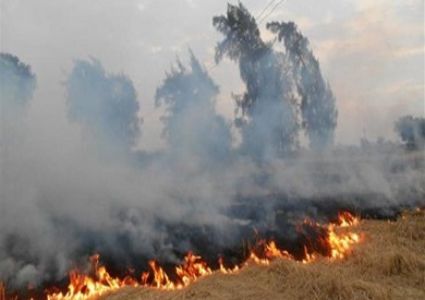 As part of its preparations for the cop27 climate summit hosted by the city of Sharm el-Sheikh from November 6 , the Egyptian authorities announced the intensification of their efforts to control the season of severe air pollution episodes known in the media as the "black cloud".

According to the estimates of the Egyptian Ministry of environment, these efforts have resulted in avoiding more than 16 thousand tons of emissions, through a set of measures to tighten control over all sources of pollution to reduce severe pollution episodes.

A government source said that preventing the phenomenon of" burning rice straw " in agricultural lands was the top priority of the official authorities, through the use of satellites to monitor those violations, in addition to providing many facilities and rates to help farmers collect rice straw and sell it for an appropriate financial fee.

In this context, the Egyptian Minister of Environment and the envoy of the climate conference Yasmin Fouad pointed to the increasing demand of farmers to open rice straw collection sites, where almost 1.3 million tons of rice straw were collected, with 86.4 percent of the amount resulting from the cultivated area, most of which came through the people, in 46 sites that were supported by equipment provided by the Ministry of Environment.

The Egyptian efforts extended to inspect 2,102 industrial facilities, monitor 335 violating facilities and take the necessary measures against them, in accordance with environmental requirements and the authorities ' decisions to close some environmentally polluting facilities during the autumn period, in addition to monitoring 53 cases of exceeding the maximum limits of emissions of chimneys of industrial facilities linked to the national network for monitoring industrial emissions, and are measured instantaneously.

The reduction of car exhausts came as part of the efforts of the Egyptian government, by implementing 99 traffic campaigns to inspect vehicles, and 1052 vehicles were found to be in violation of environmental standards, and taking the necessary measures about them.

The "artificial Pollution Control" Program is a way to reduce the pollution caused by factories within the Egyptian urban space, in which many of the most polluting factories participated, and one of the results of this was a significant reduction in pollution emissions in the last five years

It is worth mentioning that the latest measurements of air pollution indicated that the cities of the Egyptian Delta no longer have an abnormal amount of pollution, but are now at normal rates.