A Dutch journalist breaks into a videoconference of European Union defense ministers ... confusion and laughed 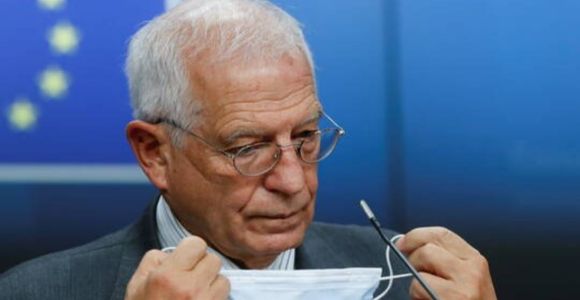 A breakthrough in a Dutch press caused a secret video conference of EU defense ministers to confuse officials, forcing them to cancel the conference for security reasons.

The hacking took place after Dutch journalist Daniel Verlan, through his careful observation of a photo of Dutch Defense Minister Anc Bielefeld, which she posted on her Twitter account, managed to capture 5 of the 6 digits of the minister’s secret code on her documents scattered above her office at home where she quarantined herself. Because of the Corona epidemic.

The scene was astonishing and everyone laughed when the journalist managed to enter the conference and greet the audience, smiling and waving hand signals to the ministers.

And when the European Union’s High Representative for Foreign Affairs and Security Policy Josep Borrell asked him, "How are you?" And “Did you know you were storming a secret conference?” Journalist Daniel Verlan responded with, “Yes, yes, I'm sorry. I'm a Dutch journalist.” "I am sorry that I boycotted your conference. I will go out," he added. Gazeb Borel replied, "It is better for you ... before the police arrive."

Immediately after his departure, the ministers meeting via video canceled their conference for security reasons, and the image of the Dutch Defense Minister disappeared from "Twitter". "It was a stupid mistake," a Dutch defense official commented. "But it reminds that you should be careful when sending a picture for a meeting."