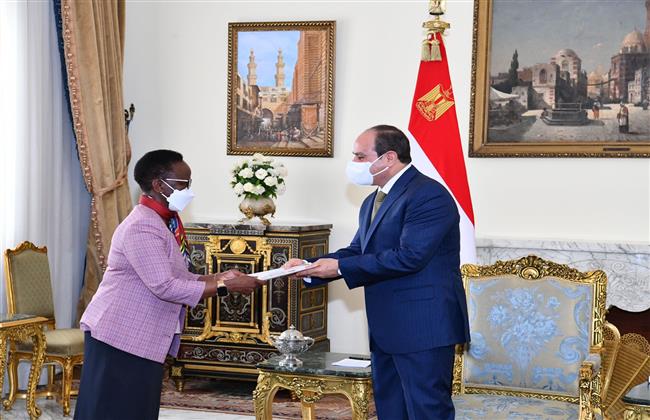 During his meeting with the Minister for Foreign Affairs of Tanzania, Liberata Moula, the Egyptian President, Abdel Fattah el-Sisi, demanded on Thursday the need to reach a binding legal agreement on the rules for filling and operating the Renaissance Dam.

President el-Sisi reiterated his request that a binding legal agreement be reached on the rules for the filling and operation of the Ethiopian Renaissance Dam, in a manner that preserves the right of present and future generations to the waters of the Nile, as his country's primary source of water.

The Egyptian presidential spokesman added that President el-Sisi had stressed Egypt's firm position to maintain its water security and historical rights acquired in the waters of the Nile.

The Egyptian President requested to convey his compliments to Tanzanian President Samia Hassan, expressing his country's pride and appreciation for the outstanding historical relations with Tanzania, stressing that there has been a strong push in bilateral relations between the two countries in recent years.

For its part, Liberata Moula, Tanzanian Foreign Minister, conveyed a written letter to President Abdelfattah el-Sisi from his Tanzanian counterpart, Samia Hassan, in which she expressed her country's great appreciation for the deep historical relations with Egypt and the keenness to continue to improve cooperation frameworks between the two sides.

This came during the adoption of the papers of Ethiopia's Ambassador to her country Shipro Mamo, according to the Ethiopian News Agency "Fana", noting that Saluhi discussed with the Ambassador of Ethiopia bilateral relations between the two countries and ways to support them in all areas.

The two sides also addressed the steps being taken to achieve peace in Ethiopia and the development of the Renaissance Dam's construction.

We have 236 guests and no members online