For high speed and overload... 11 killed and others injured by a bus capsize in southern Kenya 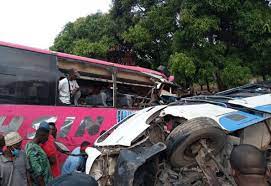 As a result of the high speed and overload permitted by law, 11 people died after a bus capsized in Kanyonyo district of Kitwe Province (southern Kenya), while others were taken to hospitals for treatment

The local Standard Media website said on Sunday that "11 people died late on Saturday as the bus on board was overturned upon their return from a wedding in Mbondoni."

The site quoted a police official from the area, Jacob Moeti, as saying that "the vehicle was travelling at a high speed, resulting in a loss of control and a deadly collision with a pit that caused it to go off course".

"At the time of the accident, there was an overload of 14 passengers."

He added that "10 people were killed immediately and the 11 victim breathed out while receiving treatment at the level 4 Mato Hospital", noting that "a few other passengers were injured and taken to the same hospital, some of whom were seriously injured, to the Kenyatta National Hospital in Nairobi."

On 20 February last, at least four people died, including two Canadian nationals, and two others were injured in an incident in the Dagoretti area along Ngong Road, Kenya's capital, Nairobi, according to the local site The Star Co.

Last 4 July, 15 people died as a result of a two-bus collision on a highway south-eastern Kenya.

We have 221 guests and no members online