60 years ago .. did Khrushchev really hit the UN pulpit with his shoes? 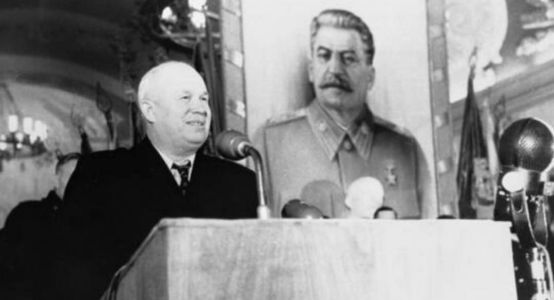 Many people remember the story of the famous Soviet leader Nikita Khrushchev's speech, which reportedly accompanied him by beating the rostrum of the United Nations with his shoes.

Today, October 12th passes the 60th anniversary of this event, which many consider to be one of the great fads of the American press.

This was proved by historian and writer Alexander Myasnikov, in an interview with the newspaper "Komsomolskaya Pravda."

Responding to a question, how the famous shoe’s story came out, the historian said, “The New York Times ran an article about how Khrushchev waved his shoes and hit him on the table. This article caused a sensation around the world, on the topic. And immediately, as it usually happens. When rumors appear, he jumps out of where the eyewitnesses do not know to tell their stories enthusiastically, and each hurries to add his own touches to the interesting story and remembers how Khrushchev took off his shoes, started waving it over his head and then hit the table with it.

Then, "a picture of Khrushchev was posted on the podium of the United Nations with a shoe in his hand. Later, a video clip was released showing Nikita Sergeyevich knocking on the stage with his shoes. A whole bunch of sober newspapers and magazines published all of these pictures, and they were repeated many times on" Pages of other newspapers and shown on television. "

But in reality - the photo and the video are completely unrelated to the truth and were professionally faked. Many specialists have proven this. "

Myasnikov added, saying: “To verify this, you must carefully study all pictures of Khrushchev taken at this General Assembly meeting. Attention should be focused on his feet. The Soviet leader during that session was not wearing any shoes, he was in open sandals, and this is a fact. It was revealed by his son Sergey Khrushchev, who was present at that meeting of the General Assembly. "

In an interview, Sergey said: “When my father entered the hall, journalists surrounded him from all sides, and one of them stepped on his foot, because of this, the shoe fell, or rather the sandal. Khrushchev did not wear it again, because it was inappropriate for this fat man to bend over. In front of the cameras and trying to wear it. So he went and sat down, and his escorts brought a sandal, covered with a handkerchief, and it was placed in front of him. "

On the table in front of the head of the Soviet delegation, the audience saw an object that looked like a shoe covered with a handkerchief. According to a reporter for the American Life magazine, more than a dozen photographers pointed cameras at Khrushchev when his escorts brought this thing under the handkerchief and put it on the table. "

The historian emphasized that no photo had been taken of Khrushchev waving a shoe and hitting the table with it. But the fake news reinforced the Soviet leader's image as a stubborn, unpredictable person.

We have 286 guests and no members online