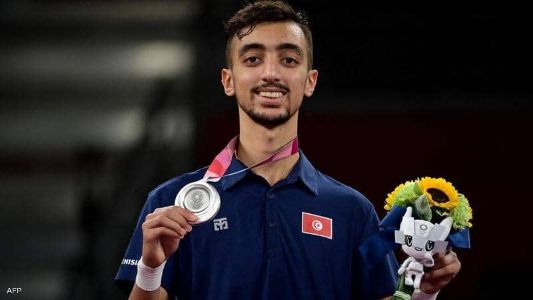 After becoming the first Arab and African athlete to receive a medal in the Tokyo 2020 edition, a silver in taekwondo taken Saturday, Tunisian Mohamed Khalil Al Jandoubi enters the history of the Olympics.

He achieved Tunisia's best achievement in taekwondo in the history of Olympic participation, when he earned his second medal in the sport after Osama Al-Wassalati, who was crowned bronze at the 2016 Rio de Janeiro Olympics.

Mohammad Khalil Al-Jandoubi qualified for the 58 kg final after winning the semi-final over South Korean Jang Jun, the 2019 World Junior World Champion, by 25-19.

However, he was defeated in the final moments of the final match, to Italian Vito Dellacoila, by 12-16.

Mohamed Khalil Al-Jandoubi played among amateur clubs in taekwondo, such as the Rolex Defence Arts Club, but his father's footprint and coaches were evident in his evolution to the Olympic coronation stage.

Mohamed Khalil Al-Jandoubi, a high school student, missed the exams in order to focus on preparing for the Olympics.

On the other hand, the former trainer of Tunisia's taekwando sport, Mohamed Ali Al-Rahi, paid tribute to the achievement of Al-Jandoubi, describing his silver medal as a great pride and a worthy coronation of Tunisian and Arab taekwando in general.

Al-Rahi was the first coach to oversee Mohamed Khalil Al-Jandoubi when he first joined Tunisia in 2015.

Tunisia has raised its medal stock over the course of its Olympic participation to 14 so far, 4 gold, 3 silver and 7 bronze medals.