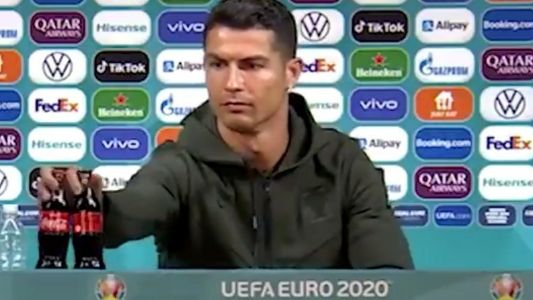 During the press conference in preparation for the Portugal-Hungary match at the European Championships, the Portuguese star, Cristiano Ronaldo, surprised his followers with an odd attitude, when he removed two bottles of Coca-Cola from his front.

And once Cristiano Ronaldo sat at the table in preparation for the press conference, so he didn't notice that there were two bottles of Coca - Cola, he moved them elsewhere on the table so they wouldn't be in front of him, even though Coca - Cola is one of the official sponsors of the Euro 2020 tournament.

The star then grabbed the ball with a water pack that was also in front of him, and lifted it into the air, advising his followers to drink the water.

Ronaldo's move was a reference to the damage of soda, but this action will inevitably lead to a crisis between Coca-Cola and the European Union.

Under the sponsorship contract between the parties, UEFA is obliged to promote Coca-Cola during press conferences.