After achieving two Guinness records, the alligator of Egypt is preparing for a new number in the Manch Sea, and the world star Van Dam is supporting him. 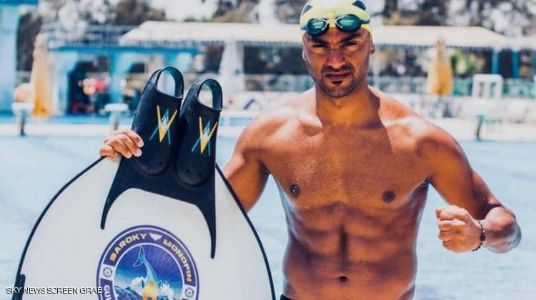 Just before he travelled to England to achieve a new record for Egypt, crossing the Manch Sea with fins, from England to France. The Baroque named "Alligator of Egypt" finished his final rehearsal in one of the lakes of the Suez Canal.

The Egyptian swimmer says, "The world figure of Manch crossing with fins has never happened before. I have decided to be registered with my name and that of Egypt. I have achieved 33 km swimming with fins.

"The Crocodile of Egypt has achieved a 35 km swim in the Nile River, which is one of the strongest currents in the world, because of the weight of water and the silt in the water, from the community club to the island of Iraq back and forth with and against the current."

The last baroque rehearsal in which he was able to swim for two hours was cut 13 km across the stream, from the Ismaili Sail Club to the area of the unknown soldier back and forth.

The world star Van Dam had posted a video supporting the baroque to break the Guinness Encyclopedia in crossing the Manch, wishing him well, calling him very brave, and that he could achieve anything.

The Alligator of Egypt was the first Arab and African to enter the Encyclopedia of Guinness after achieving two records, in the "Dolphin Jump" category during its 2011 trip to Italy and China.