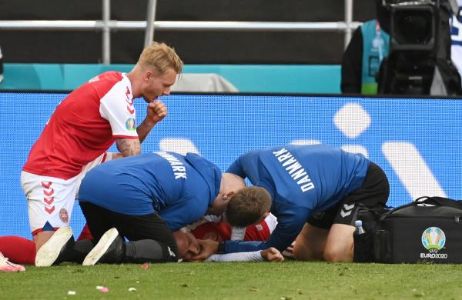 During his country's match for Finland in the European Cup, Denmark's doctor revealed "shocking" details of player Christian Eriksen, who lost consciousness and nearly died.

Denmark's doctor Morten Posen confirmed that the midfielder suffered a heart attack during his team's opening game, and even "died for minutes."

In a press conference, Posen said: "His heart stopped. We had a pulmonary heart recovery. It was a heart attack. He died for minutes and then we succeeded in bringing his heart back to work after using a defibrillator device once, "adding that Eriksen would stay at the hospital for further tests.

Posen continued: "The tests we've done so far seem reassuring. We have no explanation as to why this happened. "

Eriksen (29) suddenly fell in the 42nd minute running near the side line of the stadium after a side shot for Denmark.

While there was silence in the stadium, where 16,000 fans gathered, his colleagues gathered around him while he was being treated at the stadium and then taken to the hospital with a pickup.

The director of the Danish Football Federation, Peter Møller, said that Danish players communicated with Eriksen via video.

Danish coach Kasper Eulmand said that the Italian Inter Milan player informed him that he "doesn't remember much of what happened in Saturday's game," and that he "yearns to get back on the pitch."

Yulmand added: "He wants us to keep playing. He says he feels like he can play again. Christian is at his best when the ball is close to his foot. "

Former Denmark players Peter Schmeichel and Michael Laudrup criticized UEFA's handling of the incident. The Danish players were given the option of completing the game on Saturday evening or Sunday.

Yulmand said: "After rethinking what happened, I don't honestly think we should have gone back to the stadium. I thought we could have behaved differently. "