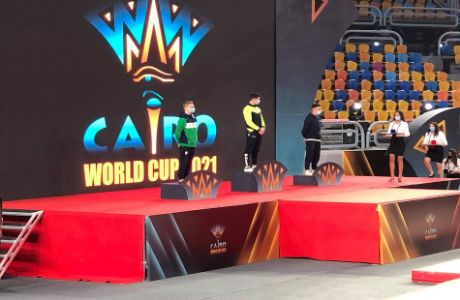 Egypt achieved an unprecedented achievement during the current World Cup of Gymnastics in Egypt, being the first African country to host the World Championships, and, along with the honorable organization, the "Pharaohs" have managed two gold medals so far.

The first was by Nancy Tasman, on the jump table, where she received 13.32 points to win first place and the gold medal.

The second was taken by the player Ali Zahran, on the throat device, where he received 14.70 points to take the first place in gold. The Gymnastics World Cup saw the participation of more than 300 players and players representing 16 countries from different nations of the world.

Egypt also has an opportunity to increase the number of medals for the remainder of the World Championships, and the Egyptian champion, Ali Zahran, is revealing the backstage of the gold medal.

Ali Zahran says that all Egyptian players had one goal, which is to achieve gold medals in various organs, especially since the tournament is organized for the first time in Africa, specifically on Egyptian soil.

Zahran adds: "This was the first tournament that I took part in, after the re-emergence of sporting activity in the Corona crisis, and we participated in various camps for almost a year, and with the return of tournaments, the harvest of this effort began."

he Egyptian champion also points out that he is waiting for the World Gymnastics Championships to be held in Qatar, which have been postponed more than once, so that he can earn additional points, helping him to participate in the next Tokyo Olympics.

Zahran: "In the event that I do not qualify for the Olympics, I hope that the gold I have achieved during the current tournament will be an incentive for the rest of my colleagues, who are participating in this major event, and we have one goal to pursue, namely, to honor Egypt and compete with adults in the game."