Since 2010... Inter Milan win their first title in the Italian League 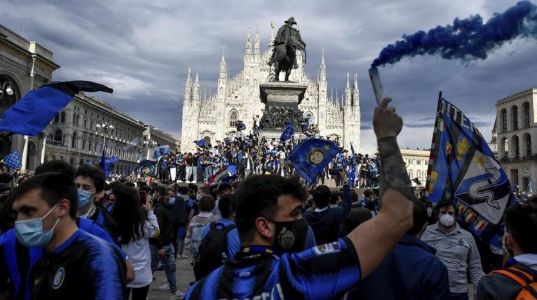 Car hoops began to escalate immediately after second-place Atalanta equalled 1-1 with Sassuolo. This confirmed that Inter was a champion - with an invincible 13 points ahead with at least four games - and fans took to the main square in front of the city's famous cathedral.

Thousands of Neirazori fans gathered in the Dumo Square, with flags and scarves, chanting and singing as they jumped and clapped with little interest in the limitations of the Corona virus. Almost all of them wore masks but many were dragged down under their chins. They also fired torches and fireworks.

Following the win, he read a lengthy statement on Inter: "We are the heroes of Italy. We can finally yell at him, having dreamed of him, having hidden him in our hearts, having held on to him as a precious dream that we did not wish to waste. "

In this regard, Inter coach Antonio Conte, who also won the English Super League with Chelsea in 2017, stated: "This is certainly one of the most important successes of my career. It wasn't an easy decision to come to Allant, when the team was not equipped to win. "

He added: "Moreover, the rival was Juventus, for whom I worked for a long time and controlled it for nine years. I accepted the challenge with great willingness. Today we can say that our sacrifices have been repaid. "

We have 149 guests and no members online