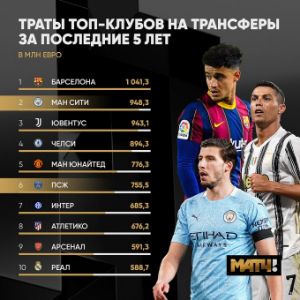 Barcelona is the only club to have passed the €1 billion barrier in five years, leading the Barcelona team's list of most money-spending clubs on contracts with players over the past five seasons.

Barcelona has spent one billion, 41 million and 300,000 euros on engagements over the past five seasons, of which more than € 400 million went in exchange for three deals with the trio: French attacker Antoine Griezmann of Atletico Madrid, his compatriot Ousmane Dembele of Borussia Dortmund, and Brazilian Coteño of Liverpool.

Manchester City ranked second, spending €948 million and €300,000, followed in third place by the Juventus team, which spent €943 million and €100,000, knowing that the only deal that exceeded the €100 million barrier was for the inclusion of the Portuguese star Cristiano Ronaldo of Real Madrid, worth some €112 million.

It is remarkable that the top 10 clubs are without the name of Bayern Munich, the German champions and the European champions last season, who have not spent more than € 385 million on engagements in the past five years.

Also striking is the fact that Real Madrid are in tenth place on this list, and that Liverpool are not the champions of the English Super League.

The top 10 most-spent club contracts in the last five seasons are as follows: