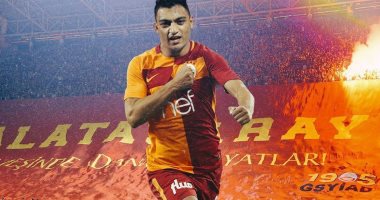 Fateh Trim, the technical director of the Jalata Sarai team, told Egyptian star Mustafa Mohammad, after scoring the winning goal for his host Antalya Spor team, at the meeting that brought the two teams together at the "Antalya Atatürk" stadium, as part of the 37-round competition of the Turkish League for the current season, 2020-2021.

"When I first came to Galata Sarai in 1996, I brought George Hajji on game day, played and scored two goals, trying to take advantage of whatever opportunity we had, in the right way, we trust Mustafa Mohammed," Trim added.Mustafa Mohamed started the match from the bench after returning to Galata Sarai's list after recovering from the corona virus, which he contracted about two weeks ago, after the last scan he was subjected to was negative.

Mustafa Mohamed entered the match in the 64th minute of the meeting time instead of his colleague Amri Akbaba. He almost scored the first goal in the 68th minute, but the counter denied him the shot.

German star Lucas Podolowski of Antalya Spor was expelled in the 59th minute of the meeting, after receiving his second yellow card.

Jalata Sarai rose to the top of the Turkish league rankings with 69 points ahead of Fenerbahçe, who had the same number of points.

We have 182 guests and no members online