After they were fired... "Street Fight" between Neymar and the Guns of Night 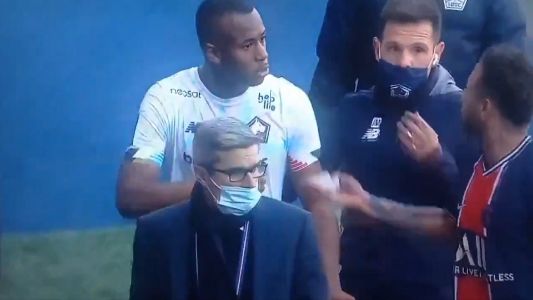 Brazilian star Neymar da Silva, France's Paris Saint-Germain attacker, got into a fight with Portuguese Teago Degallo's Guns of Lille, inside the tunnel leading to the dressing

rooms following their sacking in the final quarter of the teams' match in the 31st round of the French League, which Lille decided with a clean goal at the heart of the Princes' Park ces' Stadium.

The referee made the red card in the face of the players minutes before the end of the original time, as the Portuguese defender committed a violation with the Brazilian star, who responded by paying him, and the referee then intervened and marked their yellow card, having obtained two yellow cards during the encounter.

But it didn't stop there. It went on inside the tunnel leading to the locker rooms, where Neymar pushed Digallo back, so that the two of them would continue to interact with the members of the teams.

Neymar's performance was nervous during the match, particularly after his team delayed the score in the 20th minute via Jonathan David, who in the 48th minute received a yellow card, before getting into his fight with Degalo and coming out fired.

This is the 11th red card in Brazil's career, the fourth with the Parisian team, and Neymar's third in the French league in his last 14 games of the competition.