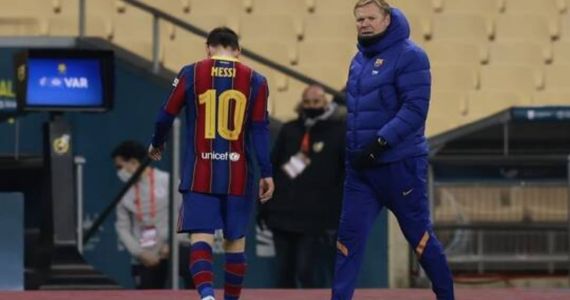 Barcelona coach Ronald Koeman defended his decision to start Lionel Messi in the Spanish Super Cup final against Athletic Bilbao after the Argentine star was sent off.

Messi missed Barcelona's victory over Real Sociedad in the Super Cup semi-final on Wednesday due to injury, but before entering the final, Koeman said that he would allow the Argentine player to make the appropriate decision about his physical fitness.

"I think after so many years at the highest levels, he (Messi) knows when he can play and when he cannot. I spoke to him and he said he was ready enough to start the match," Koeman told reporters after losing to Bilbao 2-3.

Messi appeared strong in the beginning and contributed effectively to the goal of progress, but he felt tired with the passage of time and gradually exited the air.

And he was frustrated by Messi as he reached the height of anger in the last minute of the second extra half, and attacked Bilbao player, Asier Vialiber, before the video assistant referee intervened and caused the Argentine star to be expelled directly.

"I understand what Messi did ... I don't know how many mistakes were made against him, and it is natural to have a reaction when continuing to try to commit a foul against a player looking to dribble with the ball, but I need to see the shot clearly again," Koeman said.

And with Messi receiving a red card due to violence, he will likely face four matches in La Liga and the Spanish Cup.

Barcelona will play with its neighbors Cornia in the 32nd round of the Spanish Cup in the middle of the week, while they are third in the Spanish League, seven points behind leaders Atletico Madrid, who have two postponed matches.