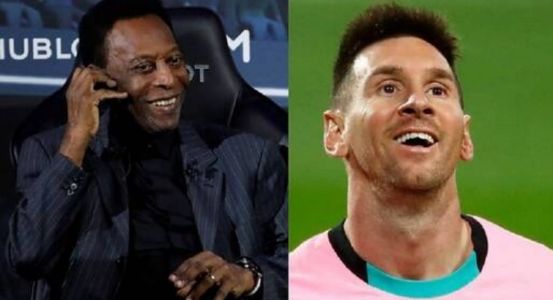 The Brazilian club Santos published on its website a statement refuting the rumors that the Barcelona star, Lionel Messi, broke the record for the legendary player Pele, for the number of goals in the ranks of one team

Messi scored a goal in Barcelona's 3-0 match against Valladolid, last Tuesday, to set the record for the number of goals in one club (644 goals) that he shared with Pele, who scored 1091 goals over the course of his career with Santos, but 643. Only of them were in official matches.

Santos club said in its statement: "They are trying to write off 448 goals, which the legend (Pele) scored in official matches and tournaments against the strongest teams."

The statement continued: "Club America (from Mexico) and Colo Colo (from Chile) each received 9 goals from Pele. Italian Inter Milan, which was one of the most prominent European teams in the 1960s, received 8 goals from the king."

The statement concluded: “The list of Pele's victims is huge: River Plate, Boca Juniors, Racing, Universidad de Chile, Real Madrid, Juventus, Lazio, Napoli, Benfica, Anderlecht, and even Barcelona, ​​where Messi now plays, has met four goals from Pele in four matches. Some analysts argue that many of those 448 goals scored by Pele in friendly matches were against weaker regional competitors, even though the matches were played in the official form, with the official rules of the game and with data entered into the protocol.

"Santos insists on the following position: taking into account subjective characteristics such as the weakness of opponents is not ideal for collecting statistics. The numbers speak for themselves. The goal against Eibar is equal to a goal against Valencia. The goal against Transvaal (from Suriname) is the same value as a goal against Real Madrid in Santiago Bernabeu stadium. "

It is worth noting that despite the opinion of his former club, Pele had praised Messi, when he equaled his scoring record before smashing it, writing through his official account on the social networking site "Instagram": "Congratulations on reaching a historical record, Lionel, I congratulate you on your career." Successful professionalism with Barcelona, ​​stories like ours of love for the club will become scarce. "

We have 188 guests and no members online