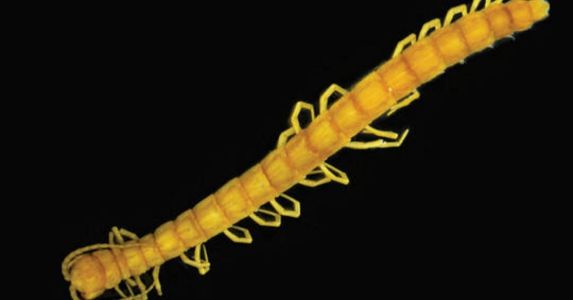 An international team of scientists discovered a new species of poisonous centipede, which they called "the king of the cave", which lives in the most isolated ecosystem in the world.

The team found the creature in the Movile Cave in Romania, a unique underground ecosystem isolated millions of years ago from the Neogene Age.

Scientists from Austria, Bulgaria and Finland studied the arthropods found in the cave after they were collected by the explorers Serban Sarbo and Alexandra Maria Hillebrand.

As the largest inhabitant of Mauvel Sulfur Cave, the newly discovered species can easily be crowned as the "king" of this "infernal" ecosystem.

The team believes that the centipede, called Cryptops speleorex, evolved from a nearby rooftop dwelling over millions of years to deal with the darkness of the cave.

It is believed that this new type of arthropod centipede never saw daylight, and lived in a very unique environment, where the oxygen in the air may be half the amount we are used to, only about 10%, but it contains a lot of sulfur.

The subterranean ecosystem is filled with rare and unknown species that feed on the millions of synthetic synthetic bacteria that line the cave wall and which in turn feed on carbon dioxide and methane.

And it seems that this infernal ecosystem, where breathing without breathing equipment, may be fatal to most of us, crowning the discovered species "his own."

Cryptops speleorex measures between 4.6 to 5.2 cm in length and is the largest known cave dweller to date. The new discovered species is described in ZooKeys magazine.

It is noteworthy that the location of the Mövel Cave, isolated from the outside world since the Neogene era, has attracted the attention of scientists since its unexpected discovery in 1986 by workers who were looking for suitable sites to build a power station in the southeastern parts of Romania.

Surprisingly, despite the harsh living conditions, diverse and unique animals are found in the Movil ecosystem. So far, the cave has been known to bestow habitat for the troglobiont water scorpion, cavefish leeches, some species of spiders, and certainly many others that have yet to be discovered.

Scientists say that the centipede is "a predator to a large extent, and the largest animal previously described from this cave, and for this we decided to name it Cryptops speleorex, which can be translated to the king of the cave."