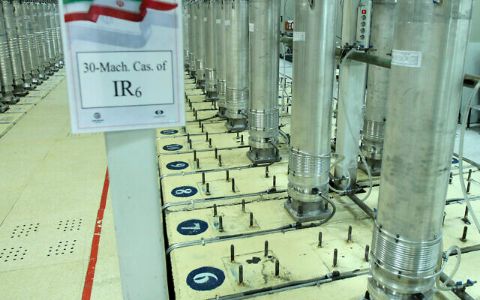 Iran has begun enriching uranium through a fourth set of advanced centrifuges (I-2M) at an underground facility in Natanz, the International Atomic Energy Agency (IAEA) said Thursday, in a new violation of the nuclear agreement.

The agency verified that Iran had begun pumping natural uranium fluoride into a fourth set of 174 centrifuges at the fuel enrichment plant," referring to the Natanz underground station.

The development comes two days after a senior U.S. official said his country was ready to simultaneously return to the nuclear deal with Iran, from which it withdrew three years ago.

The official, who spoke on condition of anonymity, said Washington is considering options to return to the nuclear deal, including indirect discussions with Iran through European partners.

This development represents a shift in the U.S. position that, since the beginning of President Joe Biden's administration, has insisted that Iran return to its obligations under the agreement, so that America can return to it and lift sanctions against Tehran.

A senior Iranian official, who declined to be named, said his country would not stop enriching uranium at 20 percent until the United States lifted all sanctions.

"Tehran will further reduce its obligations under the 2015 nuclear deal if the United States does not lift all sanctions," he said, warning that time is running out quickly.