Jasmine Sabri wears the most expensive decade in the world. 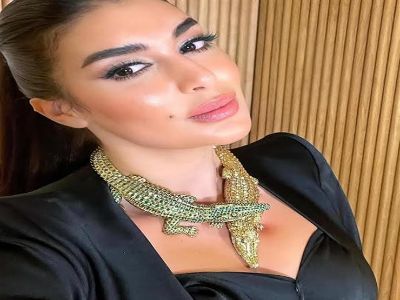 The Egyptian artist, Jasmine Sabri, revealed details of her wearing the most expensive decade in the world, after receiving it from Cartier following her appointment as the ambassador of the Panthere de Cartier campaign in the Middle East.

In statements to Sky News Arabia, Sabri explained that the contract was not intended for sale at all, and that his story belonged to Mexican actress and actress María Félix, who had two crocodiles.

In 1975, the Cartier Jewellery House designed a crocodile contract, which took two months to design, becoming one of the world's rarest jewellery.

Sabri noted that she is the third woman to wear this rare piece worldwide, after Mexican artist, Maria Felix, and renowned Italian artist, Monica Bellucci, who wore it in 2006 at the Cannes Festival.

The contract weighs up to 120 carats of diamonds and is decorated with lobes of emerald and precious jewellery in green and yellow.

As a 33-year-old Egyptian actress, Jasmine Sabri began her artistic career in 2014, through the series "Jabal Halal" and then participated in a number of other works.

In 2020, Yassin married the Egyptian businessman, Ahmed Abu Hashima, and the Koran ceremony was confined to a narrow circle, owing to Corona's prevention measures.

We have 259 guests and no members online