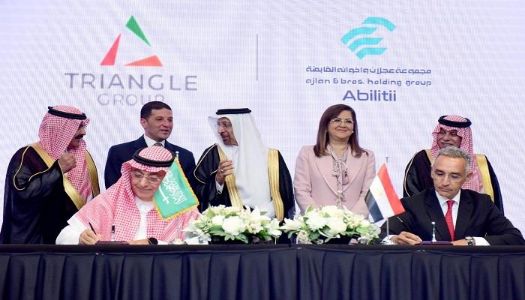 Cairo and Riyadh signed 14 agreements worth $7.7 billion earlier Tuesday, according to state media.

The government newspaper Al-Ahram published on its website that the General Authority for Investment and Free Zones "hosted the ceremony of signing 14 investment agreements between the Egyptian and Saudi sides worth $7.7 billion."

The newspaper added that the agreements and memorandums of understanding signed were between "Saudi investment groups and Egyptian government and private entities", including infrastructure, logistics, port management, food industry, pharmaceutical industry and renewable energy.

According to Egyptian Statistics Authority data, the value of trade between Egypt and Saudi Arabia rose by more than 62 percent to $9.1 billion in 2021, compared with the previous year.

The value of Egyptian remittances in Saudi Arabia was $11.2 billion during fiscal year 2020-2021, up 17% from the previous fiscal year.